Reflections on Batman: The Animated Series and Shirley Walker

Batman: The Animated Series premiered on FOX in September of 1992, when I was twelve years old. I don't remember precisely when I started watching (I don't think I was tuned in for the premiere) but it wasn't long before I was hooked. I had never really given much thought to the character of Batman before. I had seen the campy 1966 film on VHS, and the way had been somewhat prepared by exposure to, of all things, Darkwing Duck. My father had taken note of the darker direction the character was heading in comics and film, and didn't exactly approve. So in many ways, Batman: The Animated Series was my first exposure to the real Batman (with loving affection and all due respect to Adam West). It became my gateway to Tim Burton, Frank Miller, Denny O'Neil, Alan Moore and countless other artists who left their stamp on the legacy of the Bat. 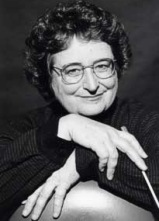 The series was also my first exposure to the work of Shirley Walker, who supervised and led a team of composers to create the music for the show. Even at twelve, I was already a certified film and television music fan, so I was especially tuned in to the scores of my favorite programs. And I knew right off the bat (so to speak) that Batman: The Animated Series was something special ... something far more enthralling and interesting than the norm. I knew that most of the cartoons I watched used library music, because I would hear the same pieces again and again. Batman, by contrast, used the same themes for characters, but did so in the context of original underscore for every episode. And what themes and scores they were! Gothic, brooding, thrilling; as wild and colorful as the Dark Knight's gallery of rogues, and the perfect complement to the show's superlative writing, acting and directing.

You can imagine my surprise when I went to the local record shop (Harmony House, for those of you who remember) and discovered that there was no soundtrack CD available to buy. At the time, market realities meant nothing to me. Every soundtrack I had wanted, I'd been able to obtain in some shape or form. It had never occurred to me that music that was so good might not have an album to go along with it. I found some consolation in the soundtrack release for the 1993 theatrical movie Batman: Mask of the Phantasm, also by Shirley Walker and featuring several themes from the series. But it was all-too-short, and lacked so many of the enthralling melodies that I craved. The only other solo Shirley Walker score available at the time was Memoirs of an Invisible Man. I resigned myself to enjoying her music in the context of the show, while it lasted, and thereafter sang her praises to anyone who would listen to me. My appreciation for her incredible gifts as a composer and orchestrator only grew deeper over the years. Shirley became one of my artistic heroes, with her music playing a significant role in my imaginative life.

Fast-forward to 2006. I had begun to write about film and TV music for Film Score Monthly magazine in 2001. Although I wrote mainly reviews and articles, I had conducted one brief interview, with the widow of a relatively obscure composer whom I admired (Harlene Stein, wife of Ronald Stein). I had been knocking around the idea of approaching Shirley Walker for an interview for a while, but I lacked the wherewithal to actually go about it. Finally, my friend and colleague Doug Adams grew impatient with me and volunteered to set up the interview. He had interviewed her himself years prior, circa her 1999 re-score of Mystery Men. The only caution he gave me was to tread carefully if the subject of her family came up, because her beloved husband Don had tragically passed away earlier in the year. I nervously sent her an email, and was thrilled when she readily agreed. We spoke on the evening of September 8, 2006. I called an hour after our scheduled appointment (I had miscalculated the time difference between Michigan and California), but she graciously didn't mention it, and responded to all my questions about her work and career with detail and good humor. The conversation drifted pleasantly once my notes had been exhausted, and by the time I hung up the phone I felt on top of the world.

Over the coming weeks, I transcribed the interview and exchanged several more emails with Shirley. The piece was published in two parts under the title "A Woman of Many Capes" in the October 2006 and November 2006 issues of Film Score Monthly Online. Then, on the evening of November 30, while I was working at the library, I received a text message from Doug informing me that Shirley had passed away due to an aneurysm. The news left me devastated. I took my break immediately, sitting alone in the parking lot of a nearby Burger King, and I remember being numb for the remainder of my shift. That night, I sent a note of condolence to the Dynamic Music Partners (Michael McCuistion, Lolita Ritmanis and Kristopher Carter), all former members of Shirley's team whom I had also interviewed for the magazine. We agreed to present their piece without alteration, save for a short memorial preface. The interview ran and life went on, although it was a long time before I could listen to Shirley's music without experiencing a lingering, bitter pang.

Almost one year later, at the beginning of November 2007, I started writing liner notes for the Intrada record label. A year after that, in December 2008, La-La Land Records announced a 2-CD world premiere release of scores from Batman: The Animated Series. Although hardly a complete representation (no single 2-CD set could have possibly done justice to the full scope and breadth of the series) it was a brilliant flame in what had hitherto been a dark void, and included music from many of my favorite episodes. I don't mind saying that I shed a few tears. A few months later, they released an expanded version of Batman: Mask of the Phantasm, which I viewed as equally important and essential. It was the beginning of a long-awaited renaissance. Superb releases of Shirley Walker's music for The Flash and Space: Above and Beyond would follow from LLL over the coming years. Meanwhile, I wrote about her supplementary music for The Black Stallion for Intrada (a gig that put me in touch with conductor and music editor Dan Carlin, Shirley's friend and co-conspirator) and began to write liner notes for La-La Land, including for Danny Elfman's Batman Returns and Elliot Goldenthal's Batman Forever.

In the Fall of 2011, I was asked to write the liner notes for the long-delayed second volume of music from Batman: The Animated Series. It would be 4-CDs, twice the length of volume one, and go a long way towards providing a more comprehensive overview of the show's music. Needless to say, I threw myself into the job with gusto. I contacted many of the show's composers for new interviews, and solicited further information from Shirley's colleague Bruce Broughton, and from Doug Frank, the Warners music executive who was responsible for hiring her. Batman: The Animated Series, Vol. 2 was released at Comic-Con San Diego in July of this year, just a few months prior to the show's 20th Anniversary. To date, nothing I have worked on has meant more to me on a personal level. I owe an incredible debt to the generous people who made it possible, in particular MV Gerhard and Matt Verboys of La-La Land Records, as well as Shirley's family of composers, all of whom were outstanding in their support of this project. I am so thrilled that this music, which I consider to be perhaps the best ever written for television, is finally getting out there for people to discover and enjoy. And it's not over yet! Future volumes of both Batman and Superman are in the works, and other treasures besides. If I could go back and show my twelve-year-old self what's been done, and what is being done even as I type this, it would blow his mind. I still don't quite believe it myself. But the evidence is right in front of me, on my CD shelf. I used to dream about holding such a release in my hands. It's not every day that a dream literally comes true. Posted by John Takis at 11:57 PM
Email ThisBlogThis!Share to TwitterShare to FacebookShare to Pinterest