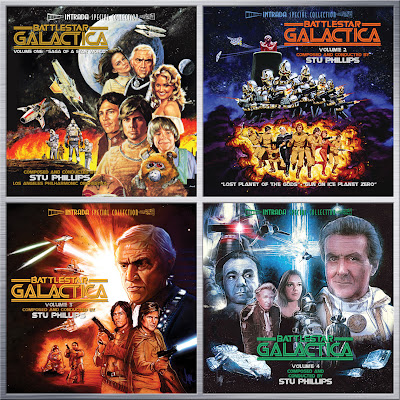 The above graphic just about sums it up. For almost two years, I've been writing about this series and music for Intrada's landmark four-volume, 7-CD series. The third volume was released over the summer, and the fourth volume was finally released this past month (both with new cover artwork by Paul Shipper). At last, fans have ALL the surviving music (virtually everything) which Stu Phillips composed for the original Battlestar Galactica series and its associated film presentations, as well as some choice cuts from the spinoff Galactica 1980. It's been a very happy project for me, and thanks are once again due to Douglass and Regina Fake, Roger Feigelson, Joe Sikoryak, Mike Matessino, and especially maestro Phillips, who was always ready to lend an insightful word. Apologies if I've forgotten anyone. It's been a long journey, but Galactica has finally come home!
Posted by John Takis at 11:55 PM
Email ThisBlogThis!Share to TwitterShare to FacebookShare to Pinterest