"We've lost one of the great filmmakers..."

It's always a sad day for film music aficionados when one of our cherished voices passes away, and the lack (from our perspective) of media attention often adds to the sting. That was not the case when John Barry left this world last week, on January 30, 2011, at the age of 77. Everyone from Sir George Martin to Alec Baldwin had something to say about the man who gave us (to name just a few examples) Born Free, Dances With Wolves, The Lion in Winter, Out of Africa, Somewhere in Time, and a dozen iconic James Bond scores, including Goldfinger and From Russia With Love. On many prominent websites, such as CNN, it was front-page news.

One comment I found particularly striking came from Barry's colleague Howard Shore (composer of The Lord of the Rings films, whose score for Edge of Darkness I tagged as one of the best of 2010 in the current issue of Film Score Monthly Online). Speaking with the BBC's Rhod Sharp, Shore stated, "We've lost one of the great filmmakers, on the level of Griffith, Hitchcock, Kubrick." This is the sort of observation that would be surprising if it came from outside of the film music community -- the majority of commentators are far more likely to describe Barry as a "film composer" rather than the broader "filmmaker," a term generally (if unfortunately) reserved for directors and sometimes producers. And yet, for those composers who are masters of their craft -- as Barry unquestionably was -- the designation is accurate and deserved. How many films' reputations were "made" in large part due to Barry's musical contribution? If you recall Goldfinger or Born Free or Body Heat to someone, for example, Barry's melodies are often the very first things that jump to mind. Then there are those films of lesser caliber whose possession of a John Barry score may well be the only thing about them worth remembering! So I'm very glad that Shore used the term "filmmaker," because in doing so he reminded his listeners -- most of them outside our little community -- of the absolutely integral role that music plays in the filmmaking process. (For the full interview, in which Shore shares further thoughts and reminiscences on Barry's legacy, please visit my fellow writer Doug Adams' The Music of the Lord of the Rings Films blog here.) 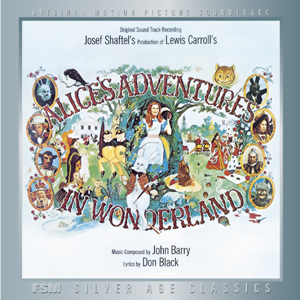 As my own tribute to John Barry, I'd like to shine the spotlight briefly on a score that I don't think gets talked about enough: that of the 1972 film musical version of Alice's Adventures in Wonderland. The film distinguished itself at the time for its all-star cast, including Michael Crawford, Ralph Richardson, Peter Sellers, Dudley Moore and Spike Milligan. It failed to make much of an impact at the box office, however, and with the dearth of Alice adaptations before and since, it has been largely forgotten today. This is a shame, because John Barry's music (with lyricist Don Black) is hauntingly beautiful, suffused with that sense of wistful melancholy which is quintessentially Barry. Writing in Stereo Review, Paul Kresh raved about the score, predicting that the main theme "Curiouser and Curiouser" would become as popular as "Born Free." Alas, this prophecy has not, to date, come true. Nevertheless, the album was released on CD in 2005 by Film Score Monthly as part of their Silver Age Classics series, paired with another Barry score, Petulia. To anyone interested in exploring the more neglected corners of maestro Barry's filmography, it comes very highly recommended.
Posted by John Takis at 5:24 PM
Email ThisBlogThis!Share to TwitterShare to FacebookShare to Pinterest