Getting up to Speed...

Hey, folks! It's been a long time between updates ... although if you've kept an eye on the sidebar, you'll have seen new projects added as they were announced. This post will serve as a recap.

First, on the creative writing front: my short story "Apitoxin" (an adventure of Sherlock Holmes) has been accepted for the second volume of the speculative fiction anthology Machine of Death, the brainchild of Dinosaur Comics creator Ryan North, writer and editor Matthew Bennardo, and Wondermark creator David Malki ! [sic]. The title of the book, which is taken from one of the stories, will be You Can't Shoot the Cancer Squad: Tales of the Infallible, Inscrutable, Inevitable Machine of Death. Each story will be illustrated for publication, and may be produced in audio form for the official website. More details will be forthcoming, but for now it suffices to observe that Machine of Death Vol. 1 was the bestselling title on Amazon the day of its release (much to the chagrin of Glenn Beck), and includes stories and artwork by dozens of incredibly talented individuals. It's an honor to be accepted into their company! For anyone who's curious, here's a video from a live event which included a conversation about the book and a public announcement of the anthology's contents. My story gets a shout-out during the Q&A segment (in the answer beginning at 58:12), and a list of titles and authors is revealed at 1:16:27.

Next, the latest issue of Film Score Monthly Online (Vol. 17, No. 2) includes a write-up I did for a "Score Restore" video feature which my friend and colleague Neil S. Bulk put together. The subject is Star Trek IV: The Voyage Home, whose score by Leonard Rosenman was released in expanded form last year by Intrada Records. (Membership is required to access the site.) 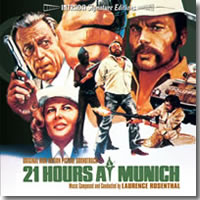 Moving on to CD liner notes, the first up is 21 Hours at Munich from Intrada, featuring music by the great Laurence Rosenthal. This is the eighth Rosenthal score it's been my pleasure to write about, and special thanks to the maestro once again for making himself available for a detailed interview. 21 Hours was a film from 1976 which told the story of the hostage crisis at the 1972 Munich Olympics. Rosenthal's dramatically rich score incorporates German and Middle Eastern elements, painting a chilling musical portrait of terrorism and its human toll. The album is already out of print, but can probably be found through secondary retailers. 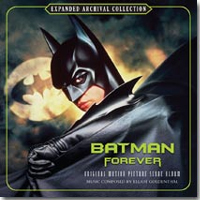 Next up, La-La Land Records' expanded 2-CD release of Elliot Goldenthal's powerhouse score to Batman Forever (1995). A student of Aaron Copland and John Corigliano, Goldenthal is one of the most important voices in film and concert music of his generation. I've been a big fan for ages, so the opportunity to write the notes for his first expanded album was a tremendous honor. Maestro Goldenthal himself produced this release, and despite his busy schedule found time to speak with me about it. His music for this film can be summed up in one word: HUGE! Big, sweeping, comic-book-inspired fun ... yet surprisingly sophisticated in its construction. I love every minute of it! 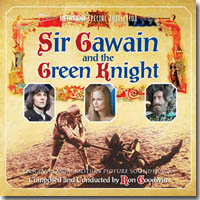 Returning to Intrada, this week sees the release of Sir Gawain and the Green Knight by the renowned English composer Ron Goodwin. Although Goodwin is best-known for his scores to war pictures, he was fluent in many genres. In this case, he produced an engrossing fantasy score, shot through with action and romance, for the 1973 Stephen Weeks film version of the medieval legend. Although not yet released on home video, the film is of significant interest, and I recommend it to anyone who has an opportunity to view it. Interestingly, Goodwin's score replaced an earlier effort by then-novice composer Richard Harvey at the behest of the studio. I want to thank Mr. Weeks for being gracious enough to share this and other details with me. 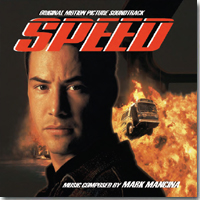 Finally, La-La Land is on the verge of releasing their 200th CD: an expanded version of Mark Mancina's landmark score for the action blockbuster Speed. This is one of a handful of scores that has set the tone for action pictures since the mid-1990s. Its previous score release, while it contained many of the score's highlights, was incomplete and sequenced extremely out of film chronology. This new, remastered assembly by Mike Matessino is an entirely different listening experience, which all fans of the score should enjoy. Congratulations to La-La Land Records on hitting #200, and many thanks for giving me a seat on the bus!

That's it for now – stay tuned for more news in the coming weeks and months! I'll try to be a bit more punctual with the updates!
Posted by John Takis at 12:41 AM
Email ThisBlogThis!Share to TwitterShare to FacebookShare to Pinterest