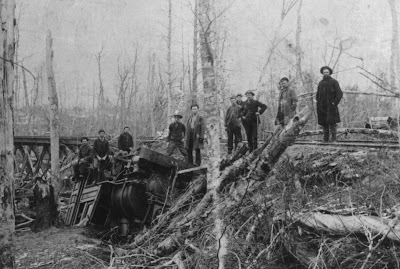 On April 9, 1894, nine loggers employed by the Staples & Covell company crowded into a narrow gauge engine for a trip back to their camp in Oceana County, Michigan. Unbeknownst to them, a small tree trunk had been blown across the track by heavy winds; the engine derailed into a ravine, and, within moments, spilled coals and a burst boiler transformed the cab into a searing inferno. The maimed men managed to escape the overturned engine, but seven of them perished horribly over the ensuing hours. Of the two who survived, one was my grandfather's grandfather, Fred J. Chalker. Had he perished with his comrades (and his survival was a very narrow thing; his injuries, many incurred in a heroic effort to rescue his fellows, were critically severe) I would not be here today to write these words. 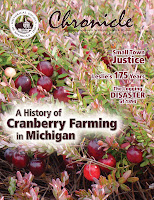 The Staples & Covell disaster is often remembered as the worst tragedy in the history of West Michigan lumber. For many years, it has been the subject of intensive research by my maternal grandmother, Harriett Chalker. A few years back, she asked for my assistance in writing a history of the disaster, informed by the oral account transmitted down through my family. I did so, and the resulting work was collected, together with primary source documents and historical photographs, into a self-printed book.

My piece, which I entitled "An Awful Doom Revisited" (after the original Whitehall Forum headline), has now been published in article form in the Fall 2011 issue of Chronicle, the quarterly magazine of the Historical Society of Michigan. It is available through their website, for those who are interested.
Posted by John Takis at 11:54 PM
Email ThisBlogThis!Share to TwitterShare to FacebookShare to Pinterest