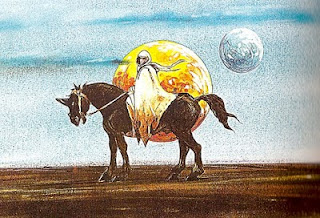 The December 2010 issue of Film Score Monthly Online includes a short article I wrote to accompany a "Score Restore" feature on Star Trek V: The Final Frontier. Through this feature, FSMO subscribers can view the film's prologue with its final production audio, and then watch the same clip with around three minutes of Jerry Goldsmith's magnificent music restored to the mix (courtesy producer/editor Neil S. Bulk). This was an exciting feature to be involved with, because (a) Goldsmith's Trek V is one of my favorite adventure scores (I also happen to think the film is severely underrated, warts and all), and (b) the music in question was not popularly known to have existed prior to a few weeks ago, when La-La Land Records released the complete score as a spectacular 2-disc limited edition – one of my personal holy grails! This is kind of like buying a new printing of your favorite book, only to discover that the author had written an extra chapter that was censored in previous editions. In other words, both thrilling and immensely satisfying!

(Note: the artwork accompanying this entry is from a Vulcanology blog feature on Nilo Rodis, who worked as a costume designer and storyboard artist on the film.)
Posted by John Takis at 4:22 PM
Email ThisBlogThis!Share to TwitterShare to FacebookShare to Pinterest