This Is How You Die Today marks the release of my short story "Apitoxin" as part of This Is How You Die, a speculative fiction anthology from editors Ryan North, Matthew Bennardo, and David Malki !. It is the sequel to the bestselling Machine of Death. The stories within these volumes are incredibly diverse, running the gamut from sober and philosophical to uproariously funny. All the stories share a common premise: the existence of a machine that, based on a simple blood test, can tell you how you will die. Not where ... not when ... simply how. The predictions never change, no matter how many times you take the test. And they always come true. The caveat is that the predictions may not mean what you assume they mean; they can be vague, or ironic. For example: "old age" could mean getting killed by an old person in some fashion, as Ryan North posits in the webcomic that kicked off the whole shebang.

The original Machine of Death was published independently a few years back, and was the #1 bestselling book on Amazon on the day of its release. That got a lot of attention, leading to This Is How You Die getting picked up by the Hachette Book Group division Grand Central Publishing (the same folks who publish Stephen Colbert's books, as it happens). We're unlikely to be #1 on Amazon this time around; sales will be spread out over many more retailers, such as Barnes & Noble and iTunes. Also, by ill fate, our competition this week turned out to be an obscure writer by the name of J. K. Rowling. But we're still shooting for the Moon! So far, the book has received glowing reviews from Publishers Weekly (who named it one of the Best Summer Reads of 2013), Kirkus Reviews, Library Journal and The A.V. Club. You can visit the official website to learn more, watch a Funny or Die promo video, and read about the campaign to get the book on the New York Times Bestseller List (which would be awesome, thanks very much). 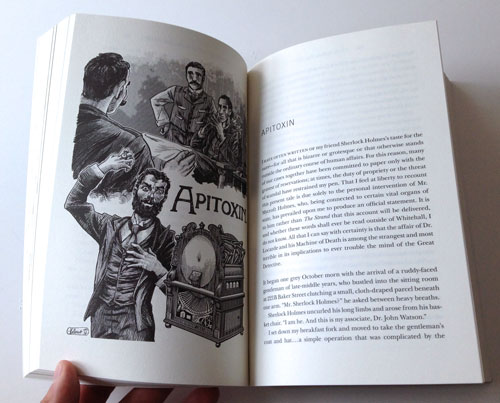 I've had a chance to see the finished book now, and it's jam-packed with terrific stories, comics and artwork. My own story, "Apitoxin," is a tale of Sherlock Holmes and his encounter with the Machine of Death, and was brilliantly illustrated by Indigo Kelleigh. His drawings are inspired by the original Sherlock Holmes illustrations that Sidney Paget created for The Strand Magazine, and the results are simply spectacular! There will also be an audiobook released at some point. Needless to say, I'm incredibly excited to be part of such an amazing project!
Posted by John Takis at 11:52 PM
Email ThisBlogThis!Share to TwitterShare to FacebookShare to Pinterest